Do you need help keeping positive? Here are 100 inspirational quotes to keep positive. Reading and adopting these quotations to keep your mind focused on what really matters in life. Employing negative thinking is never a helpful way to solve a problem. Instead, take some advice from some of the most successful people in a range of occupations about why it is important to keep positive. 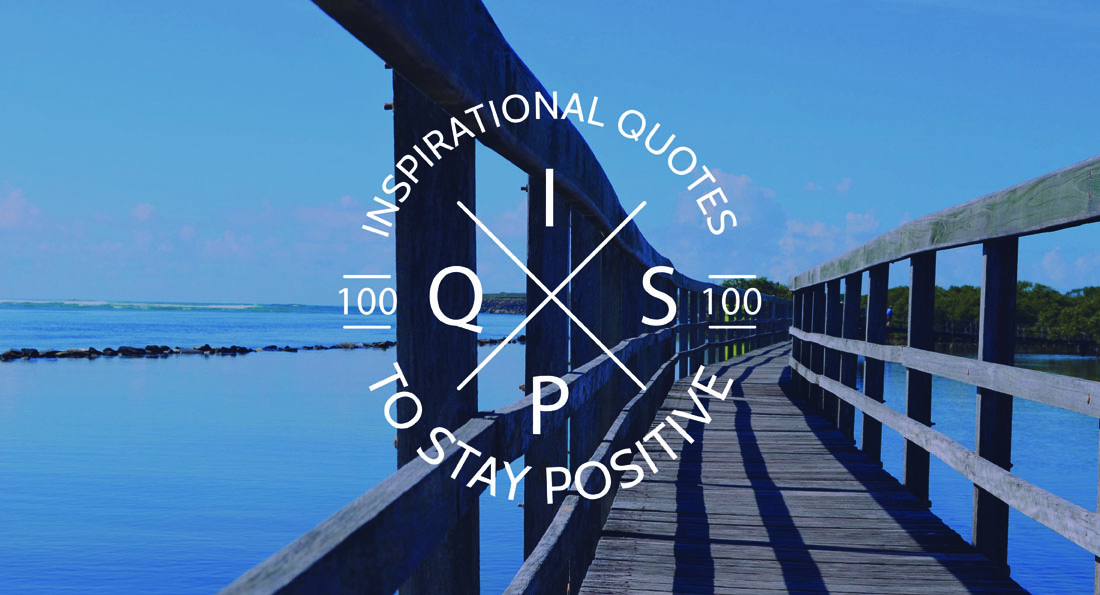 Yesterday is not ours to recover, but tomorrow is ours to win or lose.

The greatest obstacle to discovery is not ignorance – it is the illusion of knowledge.

In order to carry a positive action we must develop here a positive vision.

I believe that you should gravitate to people who are doing productive and positive things with their lives.

Many of life’s failures are men who did not realise how close they were to success when they gave up.

Correction does much, but encouragement does more.

The best thing about the future is that it only comes one day at a time.

Once you replace negative thoughts with positive ones, you’ll start having positive results.

I am the greatest, I said that even before I knew I was.

The crisis of yesterday is the joke of tomorrow.

My dear friend, clear your mind of cant.

Believe that life is worth living and your belief will help create the fact.

Remember that happiness is a way of travel, not a destination.

A mediocre idea that generates enthusiasm will go further than a great idea that inspires no one.

Positive feelings come from being honest about yourself and accepting your personality, and physical characteristics, warts and all.

I let that negativity roll off me like water off a duck’s back. If it’s not positive, I didn’t hear it.

If it’s great stuff, the people who consume it are nourished.

Find daily inspiration by choosing one of these quotation books to take home.

Sometimes the most positive thing you can be in a boring society is absolutely negative.

If you want to test your memory, try to recall what you were worrying about one year ago today.

If you’re not making mistakes, then you’re not doing anything. I’m positive that a doer makes mistakes.

There is nothing either good or bad, but thinking makes it so.

It’s not who you are that holds you back, it’s who you think you’re not.

The joy of life comes from our encounters with new experiences, and hence there is no greater joy than to have an endlessly changing horizon, for each day to have a new and different sun.

Positive thinking is more than just a tagline. It changes the way we behave.

It takes but one positive thought when given a chance to survive and thrive to overpower an entire army of negative thoughts.

If you don’t think every day is a good day, just try missing one.

Too many people miss the silver lining because they’re expecting gold.

In the long run the pessimist may be proved right, but the optimist has a better time on the trip.

My optimism wears heavy boots and is loud.

I’ve had a lot of worries in my life, most of which never happened.

To different minds, the same world is a hell, and a heaven.

No matter what the situation, remind yourself : I have a choice.

When push comes to shove, it ain’t the science that’s going to lift you up – it’s the belief.

The person who can bring the spirit of laughter into a room is indeed blessed.

In every day, there are 1,440 minutes. That means we have 1,440 daily opportunities to make a positive impact.

One of the secrets of life is to make stepping stones out of stumbling blocks.

I always like to look on the optimistic side of life, but I am realistic enough to know that life is a complex matter.

Worrying is like a rocking chair, it gives you something to do, but it doesn’t get you anywhere.

No pessimist ever discovered the secret of the stars, or sailed to an uncharted land, or opened a new doorway for the human spirit.

What we see depends mainly on what we look for.

The difference in winning and losing is most often not quitting.

If you enjoy reading inspirational quotations to stay positive, then you will love these products.

If you don’t like something change it. If you can’t change it, change your attitude. Don’t complain.

People with many interests live, not only longest, but happiest.

Clear your mind of can’t.

He who has so little knowledge of human nature as to seek happiness by changing anything but his own disposition will waste his life away in fruitless efforts.

Don’t cry because its over, smile because it happened.

Happiness is not a goal, but a by-product.

The best revenge is massive success.

No one can make you feel inferior without your consent.

Courage is resistance to fear, mastery of fear — not absence of fear.

Twenty years from now, you will be more disappointed by the things that you didn’t do than by the ones you did do.

The No. 1 reason people fail in life is because they listen to their friends, family, and neighbors.

You never regret being kind.

Boredom is the feeling that everything is a waste of time…serenity, that nothing is.

Keep your fears to yourself, but share your courage with others.

If we all did the things we are capable of, we would astound ourselves.

You get in life what you have the courage to ask for.

If you spend your life trying to be good at everything, you will never be great at anything.

Silent gratitude isn’t very much to anyone.

Never doubt that a small group of thoughtful, committed citizens can change the world. Indeed, It is the only thing that ever has.

Positive defaults protect you from yourself – and that helps you to make decisions in the moment that are better for your long-term interests.

If you know someone who loves inspirational quotations choose one of the gifts below.

Whatever you are, be a good one.

If you dream it, you can do it.

Don’t wait. The time will never be just right.

Turn your wounds into wisdom.

It is not easy to find happiness in ourselves, and it is not possible to find it elsewhere.

Know thyself means this, that you get acquainted with what you know, and what you can do.

As the sculptor devotes himself to wood and stone, I would devote myself to my soul.

It is only the very wisest and the very stupidest who cannot change.

A leader is a dealer in hope.

When one door closes another door opens; but we so often look so long and so regretfully upon the closed door, that we do not see the ones which open for us.

Any positive emotion that you’re infusing into a workplace needs to be grounded in reality. If it’s not realistic, sincere, meaningful, and individualized, it won’t do much good.

Happiness is where we find it, but very rarely where we seek it.

We are all here for some special reason. Stop being a prisoner of your past. Become the architect of your future.

You yourself, as much as anybody in the entire universe, deserve your love and affection.

If you want light to come into your life, you need to stand where it is shining.

A strong, positive self-image is the best possible preparation for success.

There is no failure. Only feedback.

All things are difficult before they are easy.

I may not have gone where I intended to go, but I think I have ended up where I needed to be.

For more positive quotations for inspiration, choose one of the books below.